Someone who hopelessly banged his head against doors of funding agencies for several years, I can definitely say that evolutionary biology is not the most appealing scientific area to be in at the moment. You want to be in the biomedical research, doing things related to clinical work or design new pharmaceuticals.

So, what keeps me from abandoning my molecular evolution studies?  Apart from the obvious academic value, I believe that this field of research has applications in healthcare, environmental protection and agriculture.

Evolutionary biology in the XXI century is far from classical Darwinism. Incredible advances in molecular biology tool-making like the advent of technology of recombinant DNA, PCR, sequencing and other methods in the preceding decades allowed us to start exploring evolution at the molecular level. We can now learn how signalling pathways changed over the millions of years, how specific interactions between proteins, DNA and other molecules transformed.  This is an important information, as it allows us to understand better the logic of physiological and pathological processes at the most fundamental level. For instance, studying co-evolution of pathogens and hosts is helpful in devising new therapeutic strategies.

As a useful byproduct of this research, while studying new animals or plants we find new bio-active molecules, which can be used in medicine and nutrition.

I never really blogged about my own work, but eventually it was going to happen, since many people ask me about what actually do in the lab.

One of my latest published projects was about evolution of NF-kappaB, a protein molecule that controls synthesis of many immune genes in animals. Without NF-kappaB our bodies cannot protect ourselves from any pathogens. It’s essential for immunity.

There are five types of NF-kappaB molecules in cells of humans and other mammals. They have partially overlapping function and they regulate hundreds of genes. We don’t know how this complexity came to be.

To investigate the origin of NF-kappaB function I looked at basal, simply organized invertebrate animals of the Cnidaria group, which includes animals like corals, sea pens and jellyfish. The organism me and my colleagues picked is called  a starlet sea anemone Nematostella vectensis. 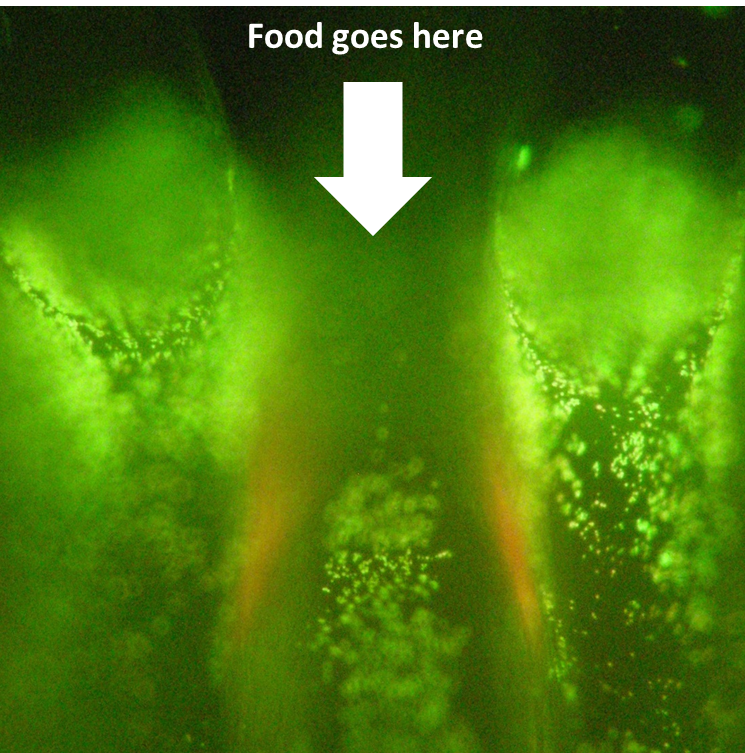 I’ve taken this fluorescent microscopy image of a starlet sea anemone Nematostella vectensis , a mouth region. Red and green glowing is caused by fluorescent proteins, expressed in Nematostella tissues, which light up under blue light of the microscope lamp. Green granules are found throughout the body of the sea anemone, while the red glowing is only present in the mouth region.  Not much of a biological message here, just a pretty picture I thought.

The ancestors of humans and Nematostella lived over 600 million years ago and since then the two lineages separated and evolved independently. Sponges and placozoans are the only animals considered to be more “primitive” (meaning simpler organized) than Cnidarians. Cells of sponges and Nematostella contain just one type of NF-kappaB compared to our five.  So, over the course of evolution our lineage made extra copies of NF-kappaB, which enabled us to involve NF-kappaB in more processes in a more complex way.

We compared certain properties of human and Nematostella NF-kappaB molecules to get an idea of what stayed the same and what changed. Remarkably, NF-kappaB binding specificity to DNA remained  practically unchanged during evolution. It means that these NF-kappaB molecules bind to the very similar sites in gene promoters, specific regions of  genomic DNA that serve to switch gene activity (synthesis of gene products) on or off. These sites are similar in me, in fish, in fruit fly and in Nematostella.

Similarly, NFkappaB inhibitors called cytosolic IkappaBs, the proteins preventing NF-kappaB activation and its binding to gene promoters, have not changed their binding preferences to NF-kappaB. Nematostella IkappaB can bind to and inhibit human NF-kappaB and vice versa is true.

Has NF-kappaB evolved at all then? 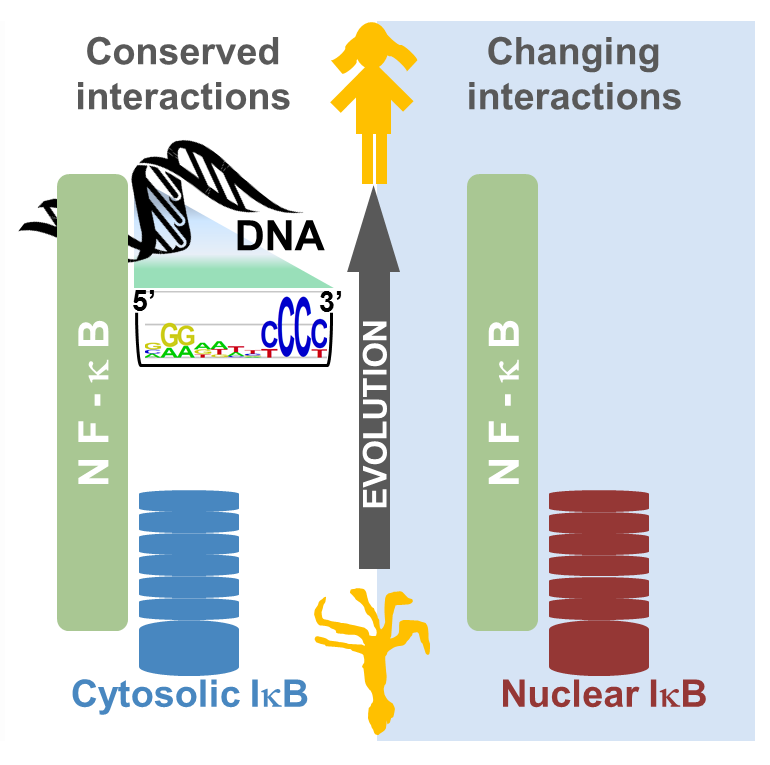 Evolution of NF-kappaB function in the animal kingdom.

We found that NF-kappaB changed the way it interacts with a Bcl3 family of its co-activators, which are also called nuclear IkappaBs. For instance, Nematostella Bcl3 molecule can only recognize and functionally aid Nematostella NF-kappaB but not its human relative. Therefore, Bcl3 uses a different interface (from the one cytosolic inhibitory IkappaBs use) to bind to NF-kappaB.

The implication of this is following: NF-kappaB-Bcl3 binding interface is under evolutionary pressure for perpetual changes.  The practical use of this finding is that one could specifically modulate NF-kappaB activity by interfering with one interface or another, as they are distinct. It could be important for therapy as there is a boom for developing drugs, which affect NF-kappaB activation. We need very specific ones. The less side effects there are – the better.

I probably confused you with all the details and molecular biology here, but I hope I gave you a flavour of what the research on molecular evolution can be like and why it is both interesting and useful. 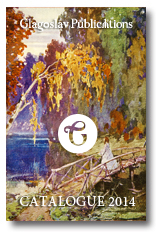