D. Bruhl as Daniel Berg and B. Camberbatch as Julian Assange in the Fifth Estate motion picture

Is this an ability to act according to one’s wishes without fear of being punished? Can you call something freedom when it takes freedom from the others?

Wikileaks, a group of hackers/ journalists headed by an ex-mathematician Julian Assange, recently became a formidable media power fighting for people’s freedom and against injustice around the world. Wikileaks’ work is based on collecting information from whistle-blowers about some foul activities of governments and corporations and publishing it online on their website or providing this information to major media players, such as Guardian.

No wonder big players in the world of politics and economics don’t like Assange. He’s been accused of committing rape and is still being prosecuted, but these charges very possibly were pressed against him for political reasons. Julian Assange has now been sheltered in the Ecuador embassy in London and he wasn’t being idle there.

A humorous take on why Ecuador granted Assange political assylum (picture by Bernd [CC0 or CC0], via Wikimedia Commons)

Time have passed to evaluate first impacts of the Wikileaks activity. The wikileaked materials on corruption in the Tunisian government were likely the major trigger of the Arab spring. The turmoil in that region continues and we have yet to see the real consequences. The most currently discussed Wikileaks’ ‘bomb’ is publishing thousands of Pentagon diplomatic cables provided by the private Bradley Manning, now Chelsea Manning, who was just sentenced to 35 years prison term. And this is the point where Hollywood steps in.

The Fifth Estate is Bill Condon’s political thriller starring Benedict Camberbatch as Assange and Daniel Brühl as Daniel Berg, a man who once was Assange’s sidekick in Wikileaks.

The film is based on Berg’s recollections of his time in Wikileaks and it is a story of Berg’s disillusionment with Assange.

Camberbatch creates a memorable character, a smart rebel and a bit of a sociopath who is keen to expose wrongdoings of the world’s most powerful people and organisations. Camberbatch’s Assange is an egomaniac, but I don’t know how true that is in relation to the real Assange. When two people go different ways, their grudges can hardly be objective in mutual judgements. This is the reason why I took the whole story as purely fictional and enjoyed it much more this way.

Camberbatch with his magnetic performance shows once again why he’s currently the number one male actor in the world. The German actor Daniel Brühl, who has just starred in Howard’s Rush, is on the rise too. It was pleasure to see Alicia Vikander (of Sweden) as Berg’s girlfriend. There wasn’t much to play here for her as in Anna Karenina, where she was Kitty, but nevertheless she’s gathering the momentum. Hollywood needs fresh talent from all over the world.

I wasn’t surprised when I read than Assange called this film a ‘snoozefest’ that has nothing common with reality whatsoever. He wasn’t portrayed in the film exactly in a flattering light. But I think the truth is somewhere in the middle. Anyway, if you are keen to explore what was real and what wasn’t, Wikileaks made it easy for you – they’ve made a list of inaccuracies and ’blatant lies’ in The Fifth Estate. Enjoy. 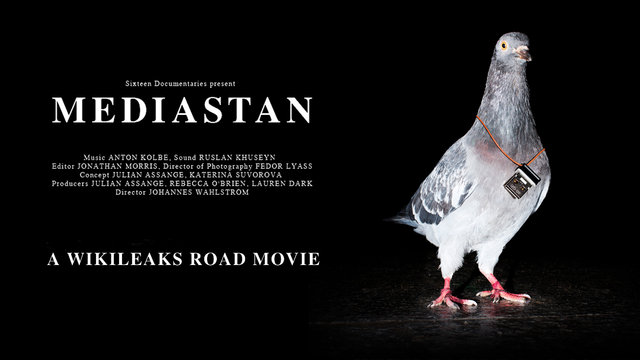 Wikileaks punched the last nail into The Fifth Estate’s box office coffin by releasing their own film, a documentary called Mediastan that focuses on ex-Soviet Middle Asia and the state of media there.  Half of the film if not two thirds are narrated and interviewed in Russian, since it’s the most commonly used language in this region. The crew is headed by a young Swedish filmmaker and journalist Johannes Wahlström, there are three Russians in the crew as well.

Factually this documentary has nothing in it I haven’t heard before. Many newspapers in this region are funded by the US, so they often couldn’t publish Wikileaks cables fearing the termination of their funding. In the ironic twist, the remainder of the film features interviews with editors of Guardian and New York Times that dealt with the infamous cables. These western newspapers couldn’t publish everything they wanted fearing law suits they couldn’t financially afford.

So in the end, Mediastan shows that the press is not free anywhere it under financial  pressure one way or another. Even Wikileaks itself is under the same pressure, they need to crowd-fund their activity, at least with Mediastan they could do it by charging for streaming/downloads.

I think there was a confusion in the media regarding The Fifth Estate and Mediastan: the two films were juxtaposed as first being fake Hollywood moneymakers and Mediastan as a truthful response to it. In reality, they are complementing each other, in my opinion.

A lot of people don’t have time to follow intricacies of the international politics but they like watching films. Both films are subjective views on the world of media. The Fifth Estate is a semi-fictional story based on real events. It’s an engaging thriller, but it’s not an archive document, so it’d be silly to expect it to be accurate and truthful.

Mediastan builds a story to make its point about oppressed media, it’s far more authentic but less entertaining. Any moderately educated individual living in the post-Soviet space knows infinitely more about the corruption and the state of media in this region than it was shown in the film. If Wikileaks intended to make a real splash they could collaborate with Alexei Navalny and produce Putinistan next time. I guarantee an explosion in the box office for such project. N.B. This could be dangerous.

Vladimir Lenin, one of world’s greatest minds, once said,

“… of all the arts, for us the cinema is the most important.“

Freedom fighters, take a note. People don’t enjoy reading blogs as much as they love watching films and pirating them, especially in the post-Soviet continent.

You may ask me what I think about Wikileaks, their activity and the films. I like being an observer, not a judge. I welcome anyone who brings information to the world. Of course, knowledge should be treated responsibly and Wikileaks’ way of spreading  knowledge will continue being debated for a long time.

We’ll see what happens next, but for now – enjoy the films.